One Shot Wikia
Register
Don't have an account?
Sign In
Advertisement
in: Characters, PCs, Campaign,
and 2 more

"All right, buddy, uh... are you good?"
— Bacta talking with Tamlin as they leave Mandalore[5]

Bacta is the unofficial leader of the Mynock crew and the best teen dad in the galaxy. His clone number was CT1776.

Bacta was a soldier during the Clone Wars. His skill as a medic earned him the name Bacta as a nom de guerre. Over his distinguished career, Bacta rose to the rank of Lieutenant, and distinguished himself as an ARC trooper.

During Order 66, Bacta resisted his programming, and attempted to save a Jedi named Sian Jeisel, with whom he was very much in love. However, Sian ended up sacrificing herself in an attempt to save a group of younglings from Bacta’s brethren. Bacta, grieving, injured, and terrified, deserted his post.

Today, Bacta grapples with his need to avenge the woman he loved, and his growing desire to live an unfettered  life free from the memories the Empire brings to mind.

His caring and sensitivity keeps him tied to the Mynock crew, with whom he’s developed an inconvenient familiar bond. He’s become the mother hen of the group.

Sometime early during his travels with Tryst and Leenik, Bacta started using the drug lesai, which allowed him to not sleep. According to him, he does this to extend the genetically shortened lifespan clones have.

Bacta serves as the Human Resources director of the ship, and makes all personnel decisions.[6]

On Myrkr, Bacta has a heart-to-heart with Tryst. He meets Lyn, who later proves to be the only other rational adult on the crew, and they get on very well.

On Mandalore, Bacta meets a fellow clone while dressed as a hotel barhop. His brother clone encourages him to pursue a more meaningful career and Bacta appears affected by this.

On Phindar, Bacta wins a contest and officially becomes a bounty hunter under the name Nutmeg Wolf. He uncharistically gets to spend the opening night of BHIKKE partying with people who celebrate him. He spends the night with Rendezvous Valentine, and believes it might lead to something more. He obtains information that his lost love, Sian Jeisel might still be alive and vows to find her.

Like many clones, Bacta had had several personality quirks that manifested in body modifications. When a clone from his unit died in battle, Bacta felt the death with uncharacteristic sensitivity, and tattooed the clone’s name and number on his arm.

Those who have seen Bacta shirtless have seen the elaborate tattoo of Sian on his chest, a Devaronian woman holding hands up to the sky.[8]. In one of her hands, she holds her lightsaber.[9]

When he deserted, Bacta was shot in the head and had to tear off his helmet. As a result, he has an ugly scar across his head from a blaster shot. His hair is shaved because the hair just won’t grow evenly there anymore. He looks weathered.  His brown eyes are angry, hollow and unapproachable.  This is not a man you would ever walk up to and ask for directions.[8]

Bacta has quite a library of medical texts. To protect them from the extensive dust in the ship, he covers them with extra dust jackets from Leenik's romance novels, as Leenik always has two copies of each book: a pristine, unopened one (with the dust jacket carefully preserved in a scrapbook), and one he reads (which has a hand-made newspaper dust jacket.) When Bacta is poring over his medical texts, Leenik fondly observes and believes Bacta is also an ardent romance novel fan.[6] 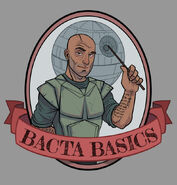 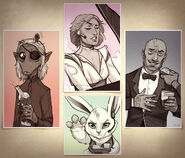 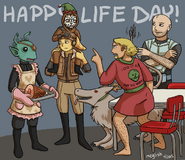 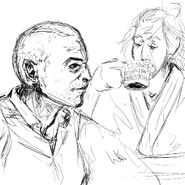 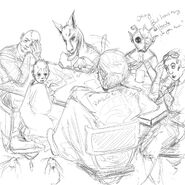