Ardor!  After seamless seduction by Trystan Valentine and capable conquest by Bacta, the crew of the Mynock has successfully infiltrated BHIKKE, the galaxy’s largest bounty-hunting convention.  They have one mission: to shop in the deadliest conditions imaginable!  Leenik has already commissioned a luxurious limb from the Ringist prostheticist Lavali.  Meanwhile, Bacta and Lyn search for an armorer capable of molding Mandalorian minerals. But with expenses mounting, will our intrepid crew actually be able to pay their debts? After all, Tryst can only go on so many dates to earn discounts.

"This one was once described to me as 'definitely a shopping and smooching episode.'  I think that's a fair assessment."

Lyn and Bacta look for a stall to buy commissioned armor- they need a forge hot enough to deal with Mandalore ore.

Lyn and Bacta have a heart-to-heart. Bacta thanks Lyn for sticking around with them, and tells her that she belongs. Lyn says the crew feels like family. Lyn asks how the crew came together; she says Bacta and Tamlin “make sense,” that Tryst is a bundle of problems, but that Leenik doesn’t seem “all that here.” The two have a serious discussion about Leenik, including his obsession with Tony. Bacta thinks Leenik may have had a breakdown because of the stress.

The two spend an hour trying to find a designer in the jewelry section but give up. They go to the armor section of the convention. Lyn and Bacta discuss Tamlin’s desire for spikes. Lyn is concerned by it, but Bacta wants to get Tamlin what he wants.  They discuss their concern about Tamlin recently using force lightning, and briefly comment on the nature of the Dark Side. Lyn suggests getting Dathomir-esque armor, which is whispy, to connect to Tamlin’s heritage.

Lyn reveals that she went to Dathomir when she worked for ExplorCorps, and that she cannot return because her work had her steal artifacts- which Lyn is not proud of.

Bacta sees good work at an armor shop owned by Sneak and Tubaik. The shopkeeper wants a bribe to say who made it, but Bacta fixes nerve damage in the keeper’s hand instead. Whistle Pete is the armorer, and agrees to do the work for Bacta on the condition Bacta, as Oliver Queen, and Lyn will wear Whistle Pete’s armor as advertising. Bacta gives Whistle Pete modified Mark II clone armor designs, the mandalore ore, and promises to return with a design for Tamlin’s armor.

In Whistle Pete’s armor, Bacta looks like a Mad Max “fetish monster.” He wears a tank top with belts for sleeves and a lether vest with football shoulder pads with leather straps dangling. Lyn looks like an 80s Mad Max: she has huge shoulder spikes , needlessly giant boots, and a helm with a Mohawk tuft.

Meanwhile, Tryst tells Leenik to tell Lyn and Bacta that they only spent half the money, not more than half. They spot Sneak; Tryst tells Leenik to kiss him quickly to distract attention away from themselves. Sneak doesn’t notice them or the kiss, but the people around them are confused. Leenik is flustered, but Tryst almost immediately foregets the kiss. They try to follow Sneak but lose him in the crowd.

Tryst notices Lyn and Bacta, while Leenik notices Rendezvous Valentine (although still does not know who she is). Tryst and Leenik both go in for an attention-deflecting kiss. Because they were both going in for it, they end up spinning each other around dramatically, attracting a lot of attention. Many in the crowd interpret that they are getting engaged.

Lyn and Bacta notice Tryst and Leenik. The crew talk about how much money they all spent. Leenik reveals the true amount they spent. Tryst reassures the group he will get enough money to cover everything on his dates tonight (with Tubaik and Lavali). Leenik asks Tryst if he needs to practice kissing; he doesn’t, but Leenik will help Tryst quick change on his dates by posing as a waiter.

The crew also discusses the need to get Chuck and Melissa back together.

Recently I've found myself in the predicament of being the roommmate of a few people don't know. Normally, I consider myself someone who is easy to get along with, but the difference in personality between me and my roommates is like night and day. I seem to be the only person here who employs rational planning while everyone else just seems to fly by the seat of their pants and hope everything turns out fine. Once, it got one of them injured but they don't seem to care too much. Have you ever been in a situation similiar to this and do you have any advice? 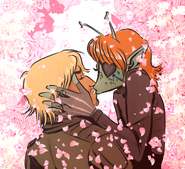 by @Renardroi
Community content is available under CC-BY-SA unless otherwise noted.
Advertisement